Getting Started with the Dragons

So back in May 2019 I managed to get hold of a Dragon 64 from a collector here in Sweden who was selling out his entire collection and quickly after I managed to get a Dragon 32 via eBay as well. The Dragon 32 was really what I was looking for since it was what I had as my first computer and was given to me during summer 1983 by my father. Main reason why it was a Dragon was most likely due to that the price was low due to to that they owner of the local radio store in the town was a friend of the family. The main reason to pick up the Dragon theme again was primary based on that I was reminded about this Welsh computer due to that I started to work for Cardiff based company and started to scan the internet for what was available around the Dragon. 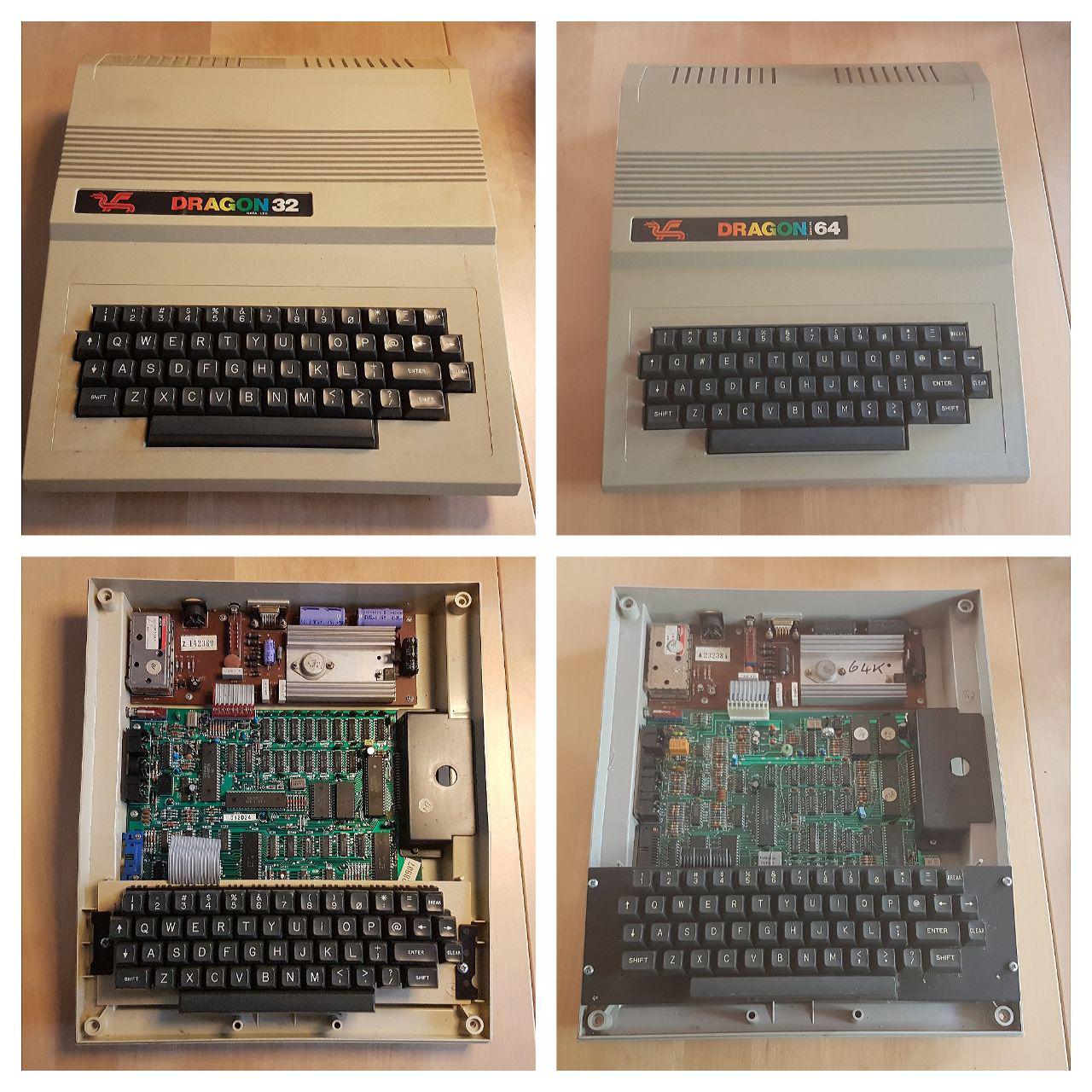 Once I had the two above machines the first step was to check out the PSU-boards in the systems and as well since I only had one power supply, which is the same for both the Dragon 32 and 64, I needed to make sure that it was in working condition (which it was not) and as well to avoid having the PSU to burn the motherboards. So quickest and easiest things was to recap both of the PSU-boards to ensure that they where in working condition. Measuring the output from the ribbon band between the PSU-board and the motherboard showed that something wasn’t alright.

So based on what was expected as output from the PSU-board and as well having a defect power supply. Got hold of parts to build a new transformed and where I tried different casing to get something as small as possible. 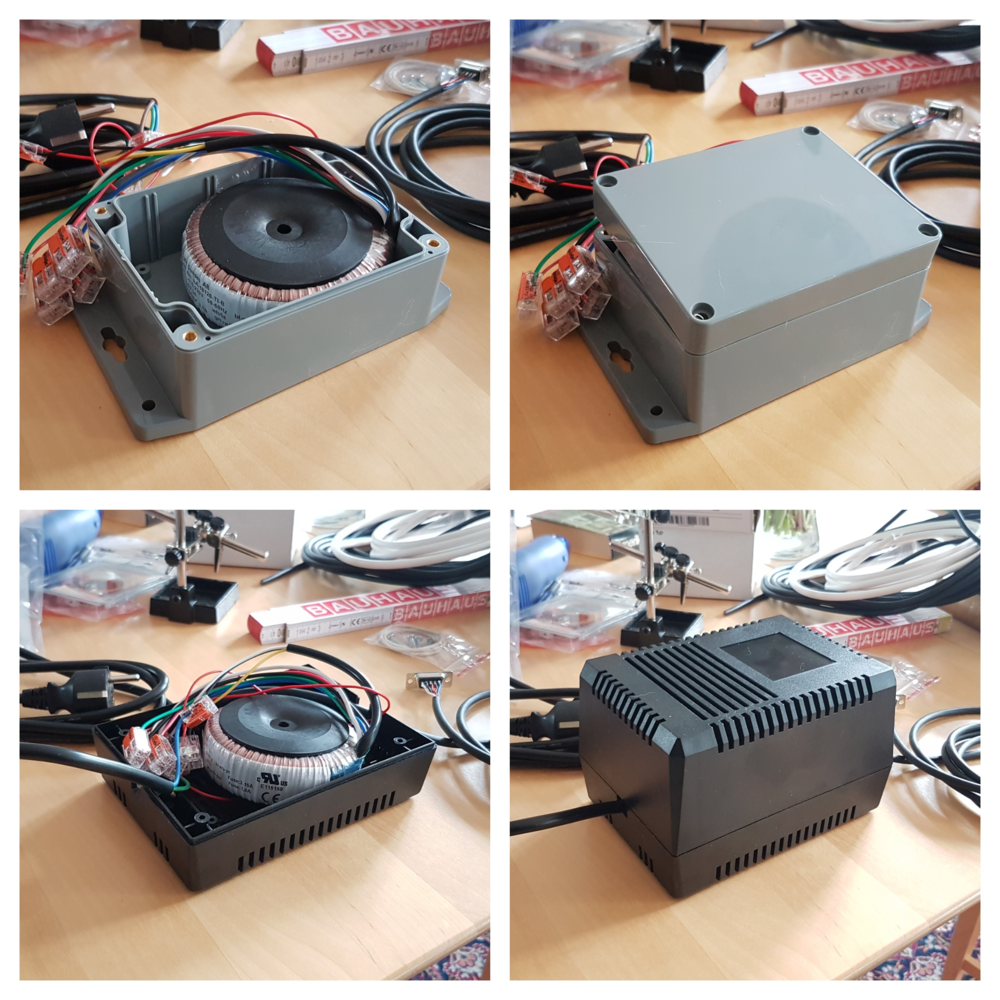 Finally received the cap-kit including the new voltage regulators for both th Dragon 32 and 64 from RetroTech so this Friday evening I just had to get started to replace the caps and the voltage regulators. So far I’ve done reg and cap replacement on the Dragon PSU-boards and holding back on the motherboards. But, the LM7805 I believe wasn’t in the best shape; well at least when looking at them and by the end of the day I did get better output value from both PSU-boards for the D32/64.

Here is the snapshot of the LM7805 which I replaced on both PSU-boards: 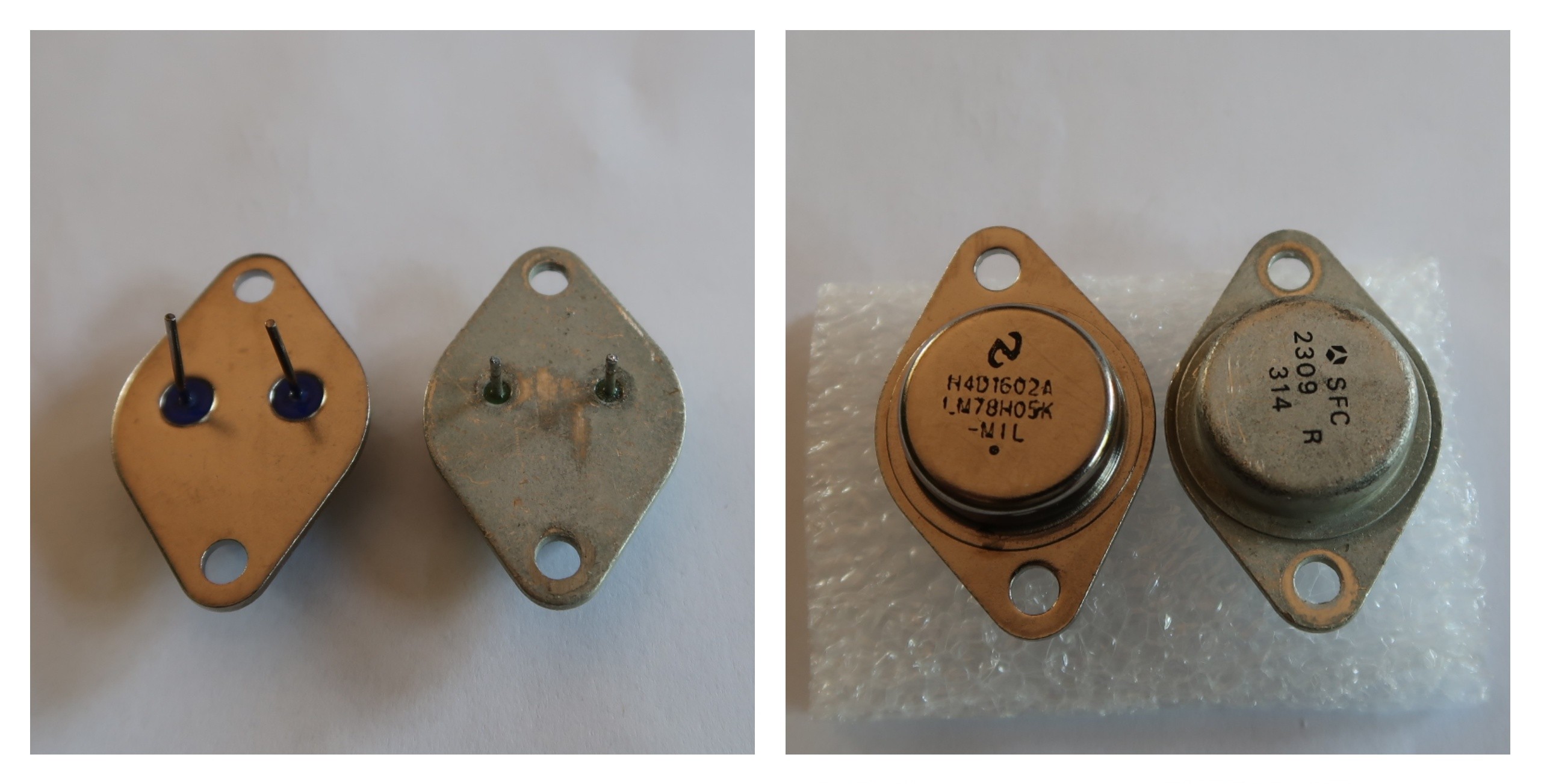 And the final Dragon 64 work done and quickly putting together the Dragon test test whether it worked or not: 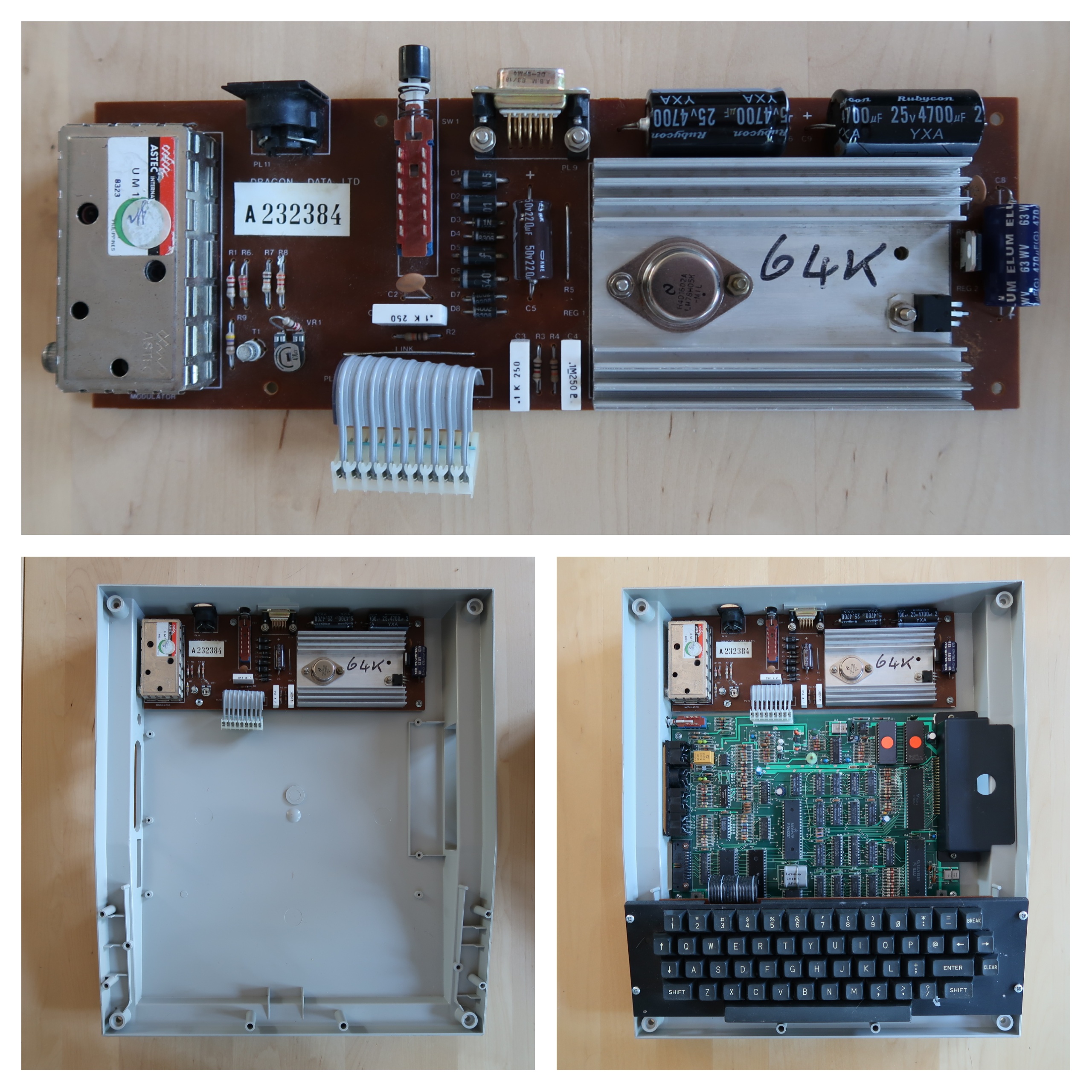 So it’s time to power on the Dragon 64 to check whether it comes alive or not to the Beetronics 17″ 4:3 screen. 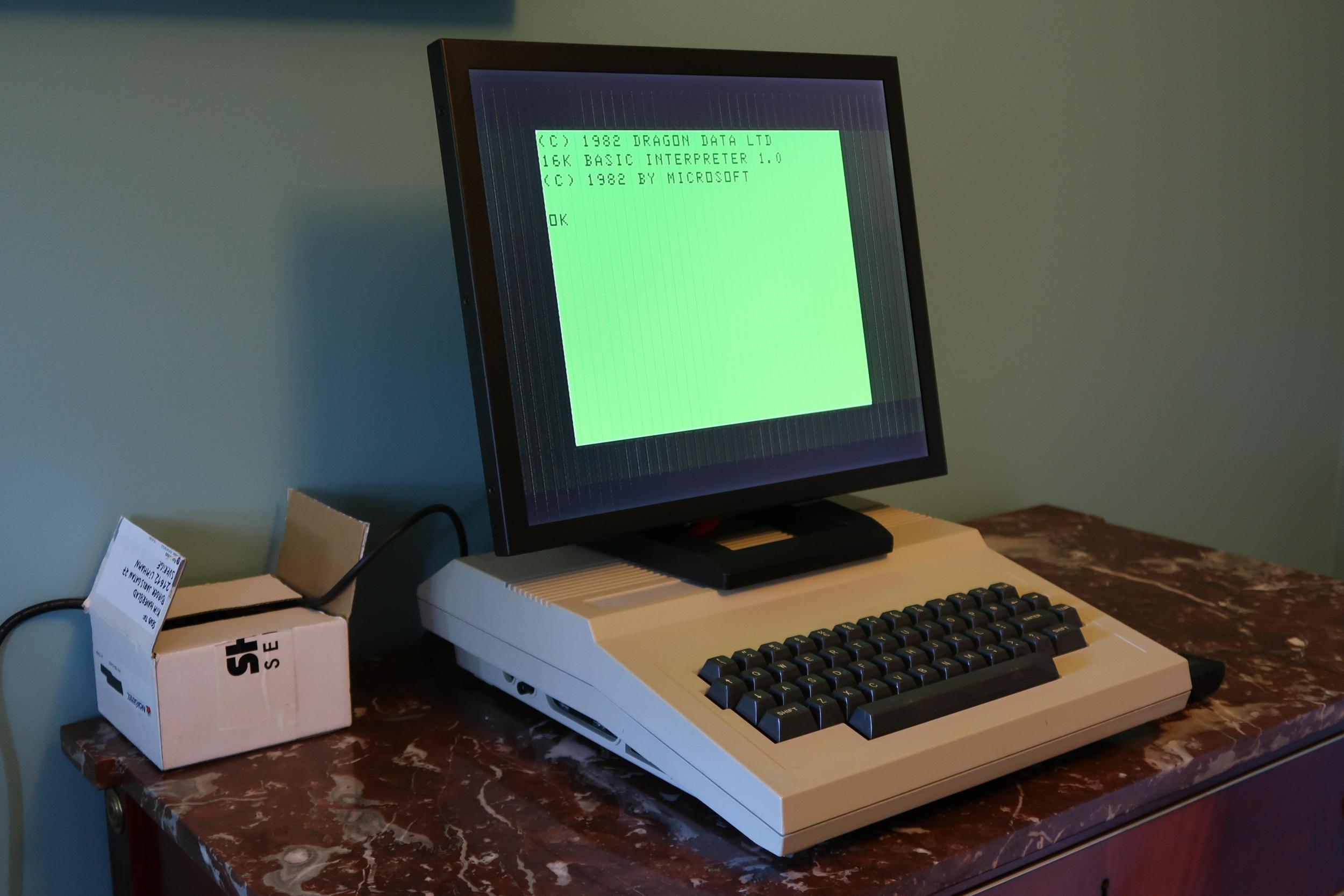 What I did notice was that the Dragon 64 did had quite a bit of vertical banding lines. But, I just need to compare how much of this artifacts actually comes through when using a CRT-monitor. Assume that the Beetronics does do a certain level of enhancement of this banding issue. While some feels that the banding is part of the charm with old computer, I would say that if it can be improved I would try to fix it. So something to play around with or maybe looking into the CoCoVGA board as an easy fix.

Theme by Anders Noren — Up ↑

We use cookies on our website to give you the most relevant experience by remembering your preferences and repeat visits. By clicking “Accept All”, you consent to the use of ALL the cookies. However, you may visit "Cookie Settings" to provide a controlled consent.
Cookie SettingsAccept All
Manage consent

This website uses cookies to improve your experience while you navigate through the website. Out of these, the cookies that are categorized as necessary are stored on your browser as they are essential for the working of basic functionalities of the website. We also use third-party cookies that help us analyze and understand how you use this website. These cookies will be stored in your browser only with your consent. You also have the option to opt-out of these cookies. But opting out of some of these cookies may affect your browsing experience.
Necessary Always Enabled
Necessary cookies are absolutely essential for the website to function properly. These cookies ensure basic functionalities and security features of the website, anonymously.
Functional
Functional cookies help to perform certain functionalities like sharing the content of the website on social media platforms, collect feedbacks, and other third-party features.
Performance
Performance cookies are used to understand and analyze the key performance indexes of the website which helps in delivering a better user experience for the visitors.
Analytics
Analytical cookies are used to understand how visitors interact with the website. These cookies help provide information on metrics the number of visitors, bounce rate, traffic source, etc.
Advertisement
Advertisement cookies are used to provide visitors with relevant ads and marketing campaigns. These cookies track visitors across websites and collect information to provide customized ads.
Others
Other uncategorized cookies are those that are being analyzed and have not been classified into a category as yet.
SAVE & ACCEPT
Powered by